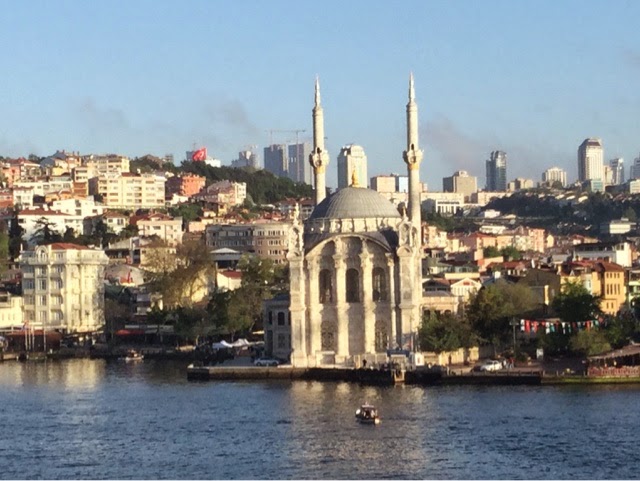 We arrived in Istanbul in the early morning with a mist on the Bosphorus, and a sunny day in store. Istanbul is a enormous city, growing from the around 1.5 million when Martin first visited in the late 1960s to around 14 million. With the two bridges connected the Asian and European sides of the town it is bustling and busy with ferries criss-crossing the Bosphorus and a very modern efficient tram system (very simple to use and well-worth using if you staying anytime and want to explore on foot).

We had a day and a night on the ship before we disembarked finally so we took advantage of the tours and started with the tour of Old Istanbul.

This began with a tour of the Blue Mosque, with its intricate blue tiles covering every conceivable wall and roof space, 6 minarets and stained glass windows pointing to the huge dome. It was crowded even early in the day and as it is a functioning mosque it was necessary to take off one’s shoes and for the women to cover their heads with a scarf not a hat!).

Then the highlight- the Underground Cistern which dates back to the 6th century and was built by the Emperor Justinian in 532 to enrues that the town had it’s own water supply that could not be ransacked by invaders.It is in amazing condition as it was ignored by the Ottoman empire who want use water uneless it is flowing and is now a mecca for tourists. If you do little else in Istanbul, visit the Cistern… it is wworth going down all the steps, queueing and standing under dripping water. 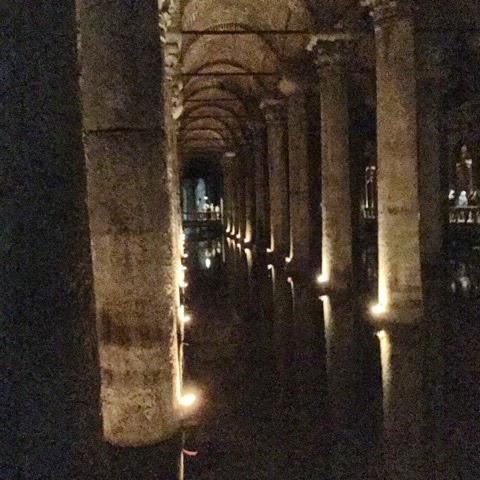 Finally we visited the Hagia Sophia, originally built as a Christian church under Constantine the Great, and rebuilt by Emperor Justinian. Justinian certainly left his mark on Istanbul, he was determined that this building would suprass all others in splendor and it is certainly awesome. Taken over by the Turks and turned into a mosque as it remained, being rebuilt and renovated until 1935 when Mustafa Ataturk had the foresight to turn it into a museum. It too is certainly worth a visit and will impress with its grandeur and incredible feats of civil engineering. 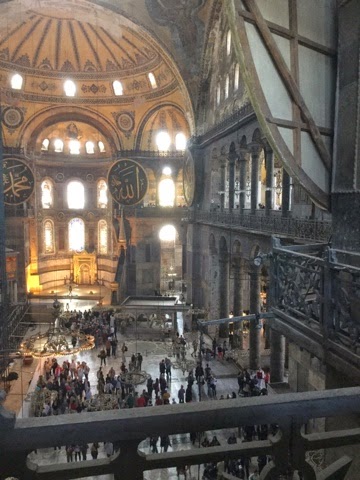 Our afternoon excursion was a more leisurely cruise on the Bosphorous. This took us up the European side of the straits and down the Asian side. With a stop at a waterside cafe for some local yoghurt (very good) and a Turkish coffee.
A beautiful sunny day made it all the more impressive. 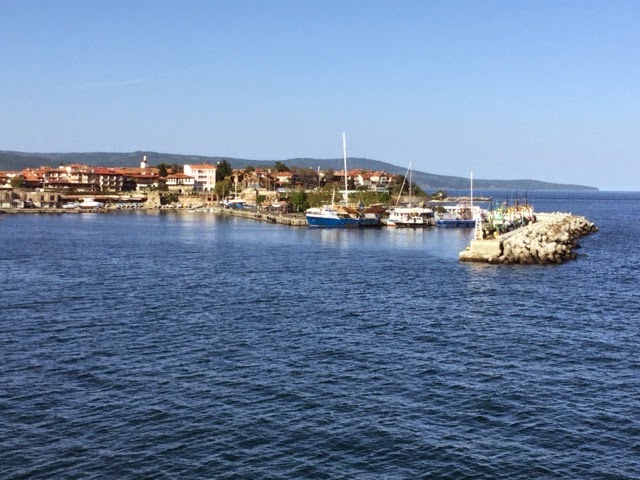 Our next ports of call were Varna and Nessebur in Bulgaria. We disembarked at Varna early in the morning after sailing through the night. Today Varna is a major tourist destination in the region.

A watery sunshine and a chilly breeze greeted us as we took a bus and walking tour of the sights of the city. As with so many towns around the Black Sea the history goes back to Roman times and earlier, and there are many Roman ruins around the harbour side. As with the other cities we have visited it too was an important link in the Ottoman empire, it see-sawed between control by the Bulgurs and the Turks for centuries,

We were taken to the Roman Baths where it is possible to get a picture of just what a big enterprise these were and how sophisticated Roman engineering was. We also visited a Roman market place where the mosaic floor was remarkably preserved despite a flood in recent years which had ruined some of the mosaic. On the down side it is all a bit fusty and in need of a clean, but it remains remarkable.

The Ethnographic Museum was another stop. This is in an Ottoman town house built by one of the upper classes almost entirely of wood. It houses local crafts and folk costumes and was an interesting overview of the culture of the region. 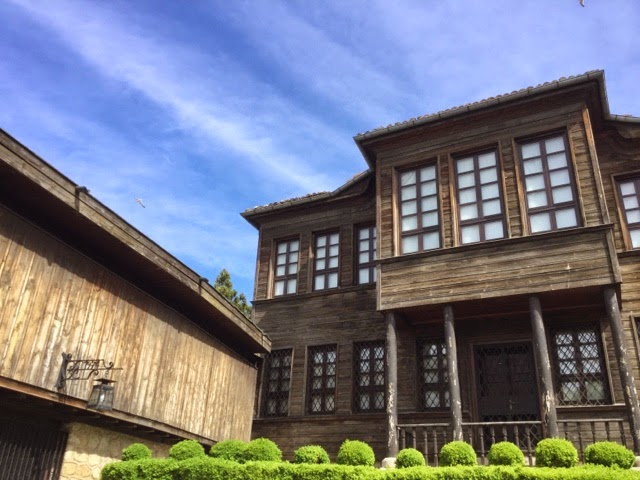 Other tours we were offered today included the Balchik Botanical Gardens, Balchik being a coast town just outside Varna, and the tour included a tour of the palace built in 1936 by King Ferdinand of Romania for his English wife Queen Marie. But as we only had a half day in Varna only one tour was possible. Often we will take ourself off to explore, but when a ship only calls into a port for a half day, unlees you have made private arrangements, taking a town tour is really the only way to see a place – sometimes you will find the port is out of town and just getting into town can talk precious time. We left Varna at lunchtime and headed to Nessebar, also known as Nesebar. Sailing into the port in the late afternoon sun was magical. It is a very pretty port and you can see why it is a major resort, not just for local but also British and German tourists.

We had a night and a day in this town, so as soon as the ship had docked we set off to walk the old part of town, right beside the port. This town too is steeped in history – going back 3,000 years. One of the most important Byzantine towns on the west coast of the Black Sea in Byzantine times, it has many churches, Roman ruins and 19th century wooden houses. It is also has a vibrant tourist sector with many shops, cafes and restaurants.

The excursion we chose the next day was the Bulgarian Village. We set off in a bus which took us on a tour of the country side and gave us a quick look at the resort of Sunny which has around 500 tourist hotels and sandy beaches. The village we visited was Goritsa, a sleepy little village populated by many retirees, where we visited the tiny local Orthodox Church, located in a small house, as this was the only way these Christians could worship in the time of the Ottoman and Muslim domination. The priest and his wife spoke very good English and gave us an excellent overview of how their church operated and their lives. 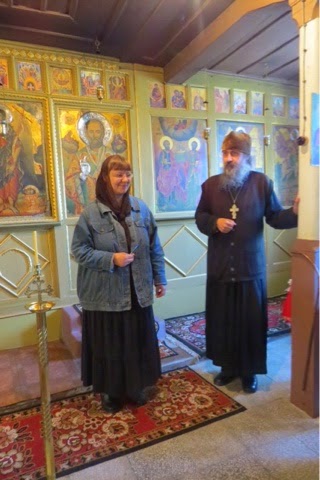 There followed morning town at the home of a local family who greeted us with the traditional home-baked bread which you eat sprinkled with a mix of cinnamon and salt (delicious), home-baked sweets and cakes (a baklava of course and other sweets baked with filo, shortbreads including kourabiedes, and  homemade cheese. The master of the house also made very good wine and had a distillery making rakia. They were warm and welcoming and it was a delightful interlude.

A visit to the local majoy followed and we were back at the ship by lunchtime. More time to explore in the afternoon then we sailed for Istanbul in the late afternoon 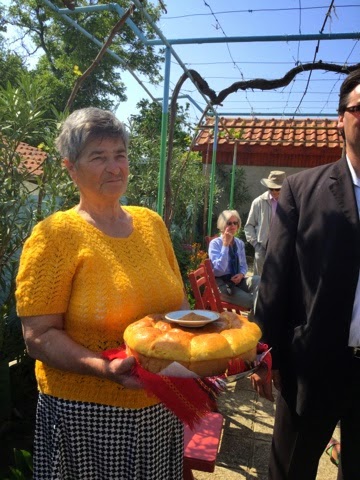 Just back from an excursion into Constanta, Romania.  We did not particularly warm to it. It is a town that has seen better days, many of the beautiful ornate mansions were requisitioned by the Communists and are now crumbling, because their owners, having got them back can’t afford to restore them. The picture is of an ornate and potentially captivating building by the waterfront, that has been everything from a home to a wedding reception house to a casino, but now in disrepair.
We did a walking tour this morning and were shown the old Roman ruins, of which there are many, including an amazingly huge mosaic floor of a former market that has been unearthed by archaeologists. Unfortunately they don’t seem to have the money to keep this in good condition either, so it’s future is probably threatened. 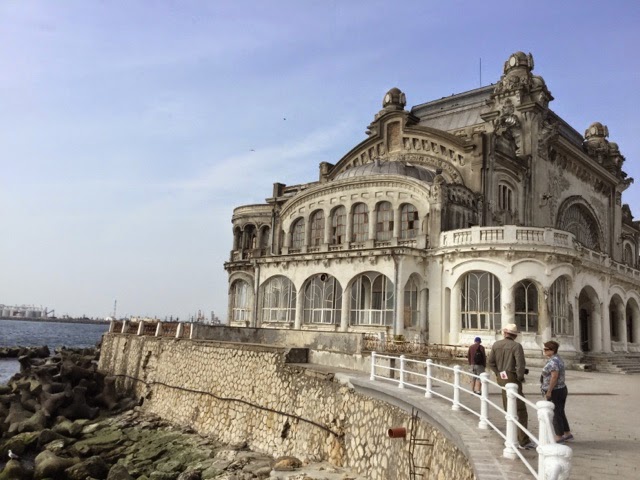 It was freezing… we thought it would be warm and sunny, as the last 2 days at sea were idyllic as far as sunshine goes… so it was good to get back to the ship and a bowl of soup.
Before our 2 days at sea, we ventured onto Russian soil at Sochi, the place of the Winter Olympics in 2014. Sochi has been described as spectacular and the mountain peaks that form the background were the site of the Olympics. It was a freezing, wet day and we opted for the excursion to see the sights and visit Stalin’s Dacha. A visa is essential for Australians entering Russia and they are very expensive and not worth if for a half day’s stopover, so there was no chance to do an independent walk around the city. Our first stop was the Matseta springs, a sulfur spring spa popular with many Russians and the reason why Stalin built one of his many dachas there.
When we arrived at Stalin’s ‘holiday house’, we found a grim dark green building, which was mostly closed to the public, even his swimming pool which was on the itinerary was closed for renovation. Kept nearly as it was in Stalin’s time, with a life-size wax figure of Stalin sitting at his desk in his office, it was quite unnerving. 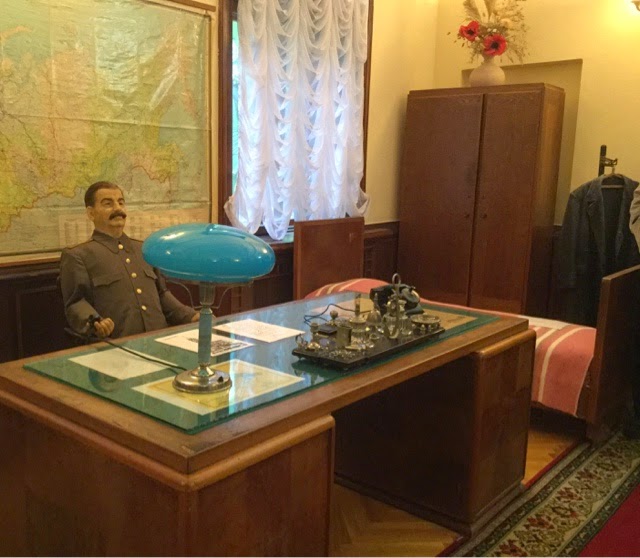 We have been listening to lectures on board by experts in diplomacy and Byzantine and military history and this has added to the tours and made the excursions much more interesting … one reason we chose this trip.
So now we have 3 more ports of call, the final one being Istanbul. Next it’s Varna, then Nessebur, then Istanbul.