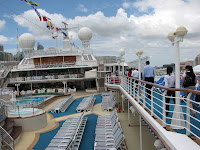 Bit late this week – at this time of year the ports are so busy with cruise ships. Today I have spent 5 hours on a ship’s visit on board Royal Caribbean’s Rhapsody of the Seas . This is what travel agents do in order to check out the ships without actually sailing on them and it gives them an opportunity to look at the different types of cabins and the facilities on board. More about that to come in the posting on Rhapsody of the Seas.
If you were watching on
11 January
Rhapsody of the Seas sailed in and out of Hobart
12 January
Nautica sailed in and out of Hobart and Sun Princess arrived and left Melbourne.
13 January – today
Rhapsody of the Seas is in Sydney until tomorrow 14 January – she sails at 6pm.
Silver Whisper has sailed into Hobart and will sail again late today.
15 January
Silver Whisper sails into Melbourne leaving the same day
17 January
Silver Whisper will arrive in Sydney, stay overnight and sail for Hong Kong next day
Pacific Sun will arrive and depart Brisbane
18 January
Pacific Dawn sails into Sydney leaving the same day
19 January
Dawn Princess will arrive in Sydney and leave again.

Ports are busy at this time of year as ships come and go for their Pacific seasons – all these ships are staying in the Southern Hemisphere. Ships visiting Australian ports this week are:
5 January
Celebrity Millenium, Volendam and Diamond Princess sailed into and from Sydney
Nautica arrived in Brisbane and left the same day
6 January
Rhapsody of the Seas arrives and departs Sydney for New Zealand
7 January
Nautica arrives in Sydney and stays overnight, sailing the next day (photo of Nautica taken at Circular Quay on 7 Jan.)
Volendam arrives in Melbourne and departs the same day
8 January
Pacific Dawn arrives in Sydney
Rhapsody of the Seas arrives in Melbourne and leaves same day, Celebrity Millenium arrives and stays overnight
9 January
Dawn Princess returns to Sydney and leaves same day
Fremantle will welcome Athena which departs same day
10 January
Pacific Sun visits Brisbane for the day
Nautica will visit Melbourne and leave the same day
Do email me – martin@travelchoice.com.au if you would like information on any of these ships and their itineraries. Or you can call Sydney time between 9 and 5 – 2 9968 1600.