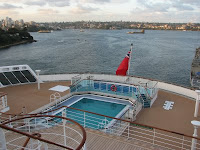 The maiden voyage of Cunard’s new Queen Elizabeth 2 sold out in 29 minutes according to the blog of Alastair Greener, Cunard’s cruise director. That voyage will start in Southampton 12th October and take her to Portugal and the ports of Vigo, Lisbon and Cadiz, then to the exotic Gran Canaria. QE2’s next voyage takes passengers to the Mediterranean for 14 nights, and is then followed by an Agean Introduction in November.
So if you are interested in booking on this gracious new member of the ocean-going royal family or on the Queen Mary 2 or the Queen Victoria for 2010- 2011 it might be worth getting your skates on.
The 2010 itineraries go on sale Friday April 17.
On her World Cruise 2010, Queen Mary 2, whose visit to Sydney in February made the headlines, will sail from New York January 4, arriving in Sydney March 7 after passing through the Whitsundays and visiting Auckland and the Bay of Islands in New Zealand. She’ll then go on to Fremantle. There is a huge choice of segments bookable on this cruise.
Queen Victoria will commence her World Cruise 2010, sailing from Southampton, UK January 4 and arriving in Sydney February 19, after visiting many ports in the South Pacific.
Throughout the year, Queen Mary 2 will cruise the Atlantic – doing the Transatlantic crossing between Southampton, Cherbourg and Hamburg and New York 21 times, plus a number of Grand Voyages.
Queen Victoria will circumnavigate the British Isles and sail from Southampton to Iberia, Northern Europe, the Norwegian Fjords, the Mediterranean and the Baltic.
Contact me if you’d like to know more or would like a brochure.
(I took the photo above from the Pool Terrace, aft on Deck 8 of the QM2 when she was in Sydney Harbour 26th Feb this year.)
You can find out first hand what is happening on the Cunard ships on Alastair’s Greener’s entertaining blog.