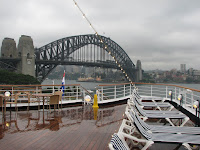 I’ll update this later… but have just realised that today is the day when Hapag Lloyd’s Europa, Holland America’s Rotterdam and Royal Caribbean’s Rhapsody of the Seas are all in port – until tomorrow 11th. The Rhapsody has moored off Athol Bay in Mosman because there is not the space for three large cruise ships. And we’re supposed to be an international port? White Bay won’t solve this problem – 2 out of 3 of these ships don’t fit under the bridge!
I’m off to inspect the Rotterdam this evening so I’ll have more to tell tomorrow! Watch this space for some pics and some news