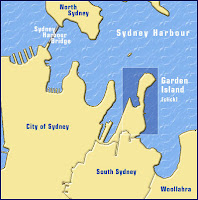 A great day for those who cruise in and out of Sydney! I have written before about the problems for the growing number of cruise ships that bring passengers to our beautiful harbour every year.
Today Prime Minister Julia Gillard announced that the federal government would guarantee three cruise ships a berth each at Garden Island over the next two cruise seasons.
The problem for Sydney is that currently the only berth is the Overseas Passenger Terminal at Circular Quay and with many ships such as the Cunard Queens being too large to fit under the Harbour Bridge they have been forced to berth in the Harbour. This means that passengers cannot easily leave the ship but have to travel by tender to the harbour. With a berth at Garden Island passengers can alight in the heart of the city making it much easier and more attractive.
Currently Garden Island is a naval depot and cruise ships such as the Queen Mary II have been allowed to dock on an ad hoc basis.

The season is beginning… and this will be the biggest season ever for cruise ships coming and going from Australian ports. Sydney alone will see 132 cruise ships entering and leaving Sydney harbour in the months from October to the end of May.
From the many visits by the ships of Carnival Australia, which is Australia’s largest cruise ship operator, to the once-only visit by the luxury German-owned Europa, Sydney Harbour is going to be welcoming cruise ships on an almost daily basis through the Spring, Summer and early Autumn of 2010 and 2011.
Below is a run-down of most of the visits. Many of these vessels will also visit other major ports around Australia, and some will also visit the smaller ports of Broome and Exmouth in Western Australia and Cairns and Burnie on the east coast.

In the six months from early October…
15 ships from Carnival cruises will visit the Australia-Pacific region
Cunard’s Queens will visit in February. After visiting Fremantle and Adelaide Queen Elizabeth will rendezvous with Queen Mary 2 on February 22 to 23, 2011. Queen Mary 2 will then visit Melbourne on February 25 and Fremantle on Mar 1.
The new Seabourn Sojourn also visits Oz in February. She arrives in Hobart on February 3 and cruises up to Sydney, then on to Adelaide and Fremantle arriving on February 14.
Royal Caribbean’s Rhapsody of the Seas will arrive on 16th October and will cruise in and out of Sydney until April.
On her world voyage, Oriana will visit Sydney on 4th November.
Holland-America’s Volendam arrives on November 5 and again on December 17 and January 2, cruising to New Zealand and the islands of the Pacific. Her sister ship, Amsterdam docks in Sydney on 13th November after visiting Darwin on November 4, then cruising through the Barrier Reef with visits to Cairns and Brisbane. This is part of her Grand Asia and Australia Voyage.
Regent is sending the Seven Seas Navigator to the Australia-Asia region this year. Her first visit to Australia is on 15th November.
Luxury liner Silver Shadow will arrive on 21st December, departing for New Zealand and returning on 19th Jan and 18th February.
German cruise ship Astor will arrive on 19th January
P&O’s newest gem, Pacific Pearl, launching in Auckland on December 21 in will arrive in Sydney for her maiden visit on February 3.
Arcadia – sister ship of the Oriana – arrives on 12th February on her world cruise.
Five-star cruise ship Europa will make her only visit to Sydney this season on 15th February.
Asuka II, formerly the Crystal Harmony, will arrive on 15th February.
Amadea will leave Broome on February 11 and arrive in Sydney on February 25 after visiting Exmouth, Perth, Bunbury, Adelaide, Melbourne and Burnie.
Crystal Serenity arrives in Sydney on 27th February at the end of a 16-night cruise from New Zealand via Tasmania and Melbourne.
Silversea’s newest vessel Silver Spirit will arrive in Sydney on 1st March as part of her inaugural World Cruise.
Saga Ruby arrives in Sydney on 3rd March, departing the same day to continue on her world cruise back to Southampton where she arrives on 24th April.
Albatros, sister ship to the Phoenix Reisen-owned Amadea, will arrive in Sydney on 4th April.
Hapag-Lloyd’s Columbus, sister ship to the luxury Europa, arrives on 5th March departing next day for Bali.
To find out more about any of these ships, their itineraries and cabin availability call or call in at Mosman Cruise Centre!