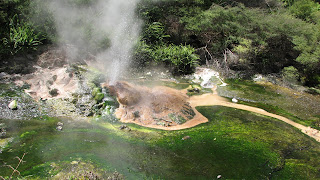 Have neglected the blog for a couple of weeks – but one of those was spent on New Zealand’s north island, bushwalking – and enjoying the splendid scenery.  We spent 3 days in Rotorua exploring the area – for the second time. A day’s walking in the Waimangu Volcanic Valley with a cruise across the Lake Rotomahana and the areas that once were the world famous pink and white terraces. Fascinating and awesome this area is seething with activity – mud and streams bubble and vapour rises from tree tops. The story of the last major eruption of the volcano and the destruction of the terraces in 1886 when the area was a popular tourist place is fascinating. A day in the museum at Rotorua, that was once a health resort, filled out the story of that violent night.
The museum is world class. Housed in the Bath House, an architectural wonder built in the 19th century to accommodate the travellers who had come to Rotorua for the health-giving properties of the waters and much, this building has an absorbing history – and we spent a day there, missing out on a trip to the spa. This was a pity and our only regret of the trip – we didn’t leave enough time to book in for a spa and massage! We had to get to the Chateau Tongariro1 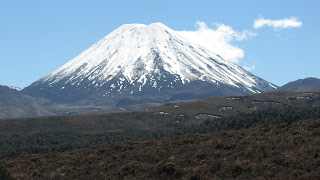 We arrived at the Chateau, in the National Park in the late afternoon as the sun was beginning to play its last rays on the magnificent Mount Ngauruhoe which was capped with snow. The hotel is excellent and we booked three nights so we could attend the Tango Ball in the Chateau on the first night and then explore some of the park over the next 2 days. We could see why this mountain featured in the ‘Lord of the Rings’ movies and over the next few days explored some of the terrain that also provided the backdrop for these involving fantasies.
Our last stop was overnight in Waitomo. Throughout the trip we really enjoyed the food and wine in the restaurants we discovered along the way, but the food at the Huhu Cafe in Waitomo was highlight. All fresh, local produce (except for scallops which apparently cost the earth in NZ and are too small) and wines. Slow-cooked roast lamb and home-made ice cream were among the best we’ve eaten. Waitomo is famous for its caves of stalicites and stalagimites and the glow-worms – and rightly so.
It was a great week – one I had planned with care so that my partner and I and our 2 friends could have an experience of New Zealand’s north island that was tailored to our needs and expectations.