Take a bow, and a captain 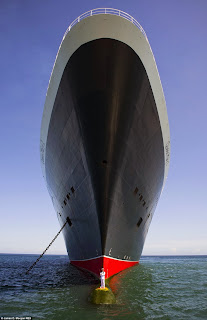 This photo of Captain Kevin Oprey standing on the bulbous bow of the Queen Mary 2 off the coast of Bali was taken to mark the ocean liner’s tenth anniversary in May. Photographer James Morgan said the photos took months in planning – and waiting for a calm sea. This photo and other breathtaking shots were first published in UK’s Daily Mail. The photographer was taking the photos for Cunard and it was his idea to set this up to celebrate the anniversary. She visited Australia in early March on her annual round the world trip. I really enjoyed my short trip on this ship and am looking forward to another Cunard voyage in the near future.