Today, day 5, we headed for Tromso, Norway’s largest town with around 75,000 inhabitants, unofficially known as the capital of the Arctic. There were stops at Risoyhamn, Harstad and Finnsnes as we made our way to the sound of Gisund. Along the way we passed under the Gisund bridge which connects Norway’s second largest island Senja with the mainland. As well as the Hurtigruten ferry service, which provides a lifeline to the communities along the fjords, Norway is criss-crossed with roads, local ferries and amazingly long tunnels.

We arrived in Tromso after another excellent buffet lunch. The food on board is always good and frequently includes local delicacies.
We boarded the buses for an excursion to a dog sledding centre. It was cold and sleeting as we drove through the township, including one of those long tunnels, arriving at the huskies’ home in about 30 minutes. With it’s main purpose as a tourist attraction this centre is extremely well set up. We were split into groups and our group went to meet the huskies. Paired in kennels the dogs live in the open and are serious pack animals. As they waited for the first sledders to leave they howled and barked, calling to each other. But they are also very friendly and were happy to be greeted and patted. This centre breeds huskies and does not sell them.
Then a trip into a yurt for cup of warm coffee and home-made chocolate cake before visiting the puppies, who are now about 4 months old. They don’t like the rain so had to be enticed out of their kennels with a little food, but once out were happy to be cuddled and played with.
Finally we changed into super warm overalls, donned our snow goggles and climbed into the sleds. Each sled had two passengers and a driver and was drawn by 10 dogs. They were raring to go and headed into the wildernes at a steady pace. It was magical. The landscape was white and crisp and though the snow was melting we were able to glide along, with the occasional bump, at a steady pace. The dogs know the route and follow the sled in front, occasionally one trying to overtake the other, but being kept in line by the drivers and a simple, effective brake system. We were snug in our sled sitting on reindeer skins with a warm blanket across our knees.
This excursion is a highlight for us! We simply loved it.
We returned for the evening meal and the Kong Harald headed towards Skjerboy and the open stretch of sea called Loppa. 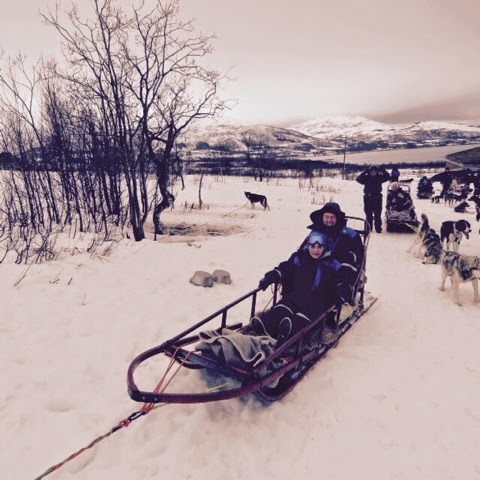 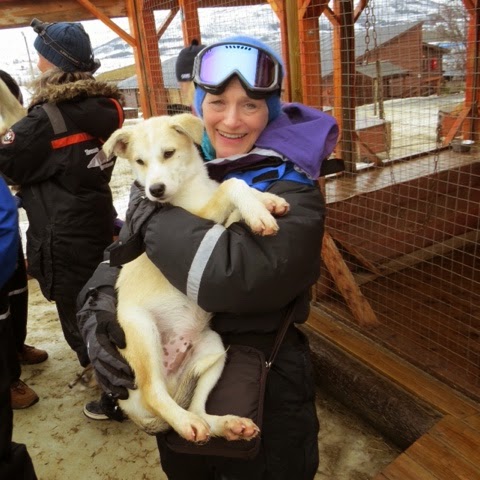