As we crossed the Arctic Circle King Neptune and his very large feet appeared on the upper deck! We gathered around to hear about his ceremonial welcome to the northernmost part of the world and were invited to be ‘christened’ with a cup of ice! In return we received a certificate and a cup of hot raspberry tea.

By lunchtime we had reached Bodo. Here there was a choice of an excursion to Saltstraumen or a Safari in zodiacs to the place where the incoming and outgoing tides meet in a very narrow channel, forming a huge whirlpool. We chose the zodiacs and zoomed out the harbour and across the bay, passing Puffin Island, but not close enough to see any puffins, and into the narrow fiords formed by earthquake action thousands of years ago, that created rocks like mille-feuille pastry with cream in between.
Tightly sandwiched in the zodiacs and rugged up in regulation insulated overalls, it was an exhilirating ride.
In the evening we took a stroller in Svolvaer to the Magic Ice Bar, just next to the wharf, where drinks are served from an ice bar surrounded by ice sculptures of sea creatures, ice thrones, men at work and all manner of other creatures. Then a welcome mug of fish soup on the deck as we entered the strait of Raftsundet, before hitting the sack. 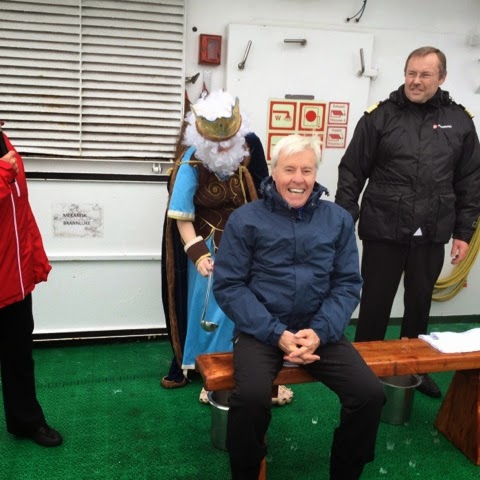