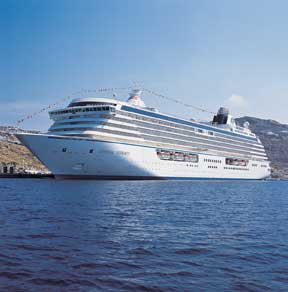 Night dash by Crystal liner to rescue Atlantic rowers
15 DEC: Crystal Cruises liner Crystal Serenity rescued two trans-Atlantic rowers thrown into the sea when a giant wave struck their eight-metre boat.
Londoner Tom Fancett and Dutch friend Tom Sauer, both 23, were picked up southwest of the Canary Islands while competing in the Atlantic Challenge, billed as the world’s toughest rowing race.
Britain’s Falmouth coastguard, which co-ordinated the rescue, said the emergency beacon from the men’s boat was triggered at 7.54pm on Tuesday, 760kms from the Canary Islands.
The nearest ship, the Bahamian-registered Crystal Serenity, was 200kms away.
“Crystal Serenity turned back and proceeded at speed through the night to the position. Within seven miles (11kms) of the position they saw a red flare,” a coastguard spokesman said.
The two men were spotted soon afterwards, clinging to a life raft.
Though having spent some 10 hours in the water, they were taken aboard uninjured.
Call Us